What the heck are carats?!

We have renamed the reward system from points to carats … that is all it is, a simple renaming. All functionality remains the same.

Why did we change the name? Because we will be using points in another capacity soon. Carats was chosen as the replacement name because it fits better into the reward system to stick with the diamond / gem theme we have for rarities, milestones, etc.

Great, I was going to post and ask about the carats later, but now I don’t have to

Any hint on what the points will do in the future?

Nope, no hints at the moment … we’ll let everyone know before it rolls out. - Joe @ NeonMob

I hope it’s a new system to trade these carats for cards instead of cards4cards because so many traders have a card and they don’t want anything I have so if these carats was like a coin to sell and buy these cards It will be so much easier for trading.

If not, can we have this system anyway in the future even if the system for credits, not carats I will pay for your credits to just have cards from another trader without a hassle 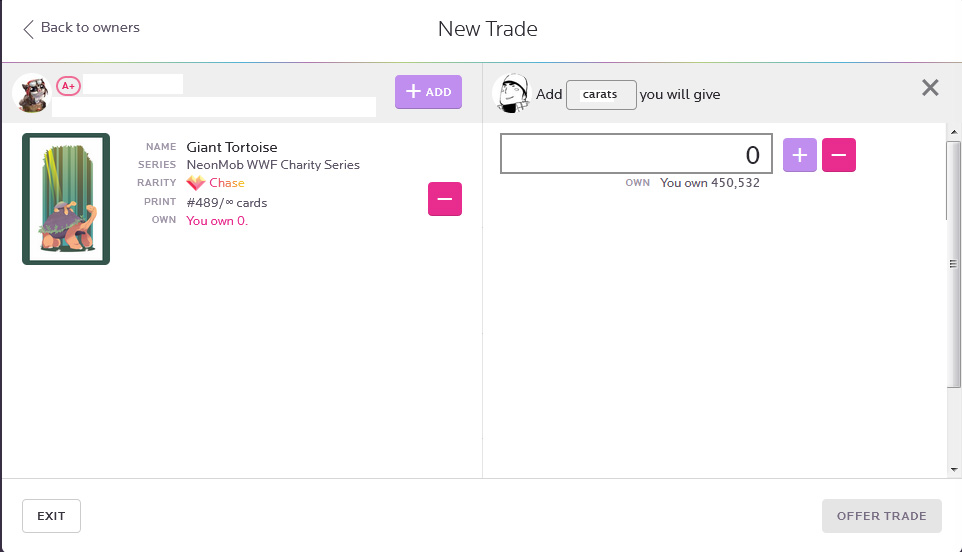 As much as I like this idea, there would definitely need to be some restrictions on it.
Like you can only offer up to “x” amount of carats for a specific rarity.
Otherwise you will have bidding wars or people holding cards for outlandish demands.

This is the same reason why they limited each trade to up to 5 cards each - to keep the system from being abused.

This is good in theory - but needs to be done thoughtfully if actually implemented.

Your idea is also good - in theory. Some cards(IDK, solarisa) would need ridiculous amount of carats to be sold out. A limit would make some cards un-sellable.

What do you mean by bidding wars? Generally people don’t interact with people other than the ones they’re trading with. I think of it as a give an offer, not a bidding situation. We (unless I don’t know about something) don’t bid on cards with other cards usually, we usually just make a trade and are done with it.

I doubt people would hold cards for outlandish demands. Some cards are rare, in that case it’s not “Outlandish”. In other cases, it would be bad for people to sell thing for outrageous prices. Think of it like this. Why would you buy a card for 1,000,000 carats, an outlandish price, when someone else is selling it for 500,000 carats, a significantly reduced price, reasonably if pretty rare. Therefore, it is better for people to keep the price lower, that way they will actually get something.

But I agree that this might be good to moderate in some way, but not by rarity alone.

In the current discarding system, a chase is worth 1000 carats, for the one I was looking, Giant Tortoise in NM WWF Charity set, I could offer 50k easily, An open bidding system is necessary since I don’t think every chase has the same value. Also, points could also lose market value since are easy to hoard.

As it happens now with the replica Darwin’s Secret, I just want to be sure I am not mistaken about when we get carts when completing series: Do we only get carats when completing the core of a set? Or do we get also some for completing chases and variants? (I have completed Cellular Automata, and am pretty sure that gettting the last missing variant did not give me addition carats - but then again, it could be time delayed).

Back to Darwin’S Secret and the reason of my question. Core is completed, but still missing 89 of 100 variants. Now this series has an interesting option of a guaranteed variant for 8 credits (duplicates must still be traded of course). That means at least 712 credits to be invested (probably more as I can’t expect to get all duplicated traded for the missing ones) to get it completed (it seems to me that the odd with free packs is very low - as I only got 11 after completing the core - there were a few crosstrades but not that exagerated).
Now, if completing the variants will not wield some carats, I have to consider if I should collect those variants at all (after all those are variants, from what I discovered “only” same designs in different collours, not that exciting in my humbles eyes ;)).

The rewards are way bigger for core than full set. Darwin’s Secrets could give you 700k for core, since is a Near Impossible set, AND 30k once you get all those variants and get a full set.

For Darwin’s Secret, the rewards are nearly 400K for Core, 85K for Full and 18K in sum for rarities form Common to ER.

That’s what I thought and felt as I completed Cellular Automata.
Well, that’s a though choice to make.