I do a lot of cross series trades to collect old series. But for such trades, you need only cards from the OoP series. Also, to make the best offer, you need to open a user profile page to get additional info.
So I decided to write a userscript which helps me with trading.

Now, the project is moved to its own GitHub repository, and there you can find the complete and actual list of provided features.

There were some troubles with previous topic, so I had to created a new one.

New feature added: filter sets.
This feature allows you to save settings of filters and, optionally, the chosen series (or series filter). It also includes a list of the hidden series.

If there is a filter set named “Default”, it will always be applied at the start of trading.

Thanks for the work.

Oh, will it work on android users with mobile interface?

As far as I know, only Fiferox for Android allows installing extensions. But I’ve not tested the userscript there.

Note, it just remembers your trades and displays auto-withdrawn ones. So if you make a trade on another device and it gets finished before the userscript sees it, there will be no notification.

Warning about cards involved in other trades

If a card is used in other trades, there will be a warning. 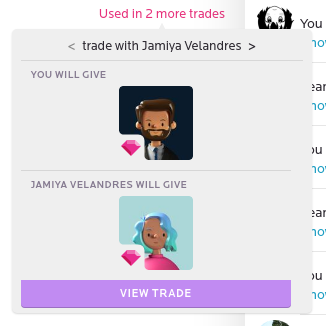 Ability to choose the print

and choose the print you need.

Hover a trade to see its preview.

The “Open pack” button is purple when you don’t have freebies or you have opened all freebie packs in the series. But PRO users have an additional freebie pack and the button still gets purple after opening 3 freebies instead of 4. Now it works properly.

Hello,
Thanks for providing this script, it looks so incredibly useful!
I’m using Brave, and it doesn’t seem to work. I’m used to using, and writing (some) tampermonkey scripts, so I’m happy to help if possible.
This is the error that appears in the console:
​ ERROR: Execution of script ‘NM trade enhancement’ failed! jQuery is not defined

Hmm, sometimes it was initializing before NM’s jQuery. Fixed in release 1.4.6. Now it should be ok.

Awesome, thanks. Works well now! However, I can no longer click on the forum’s link to access the forum.

When I do, it just closes the menu. Not a deal-breaker by any means since I can just type the forum address into the URL bar.

Weird, it doesn’t block any events. And the link to the forum in the menu works for me.

Working here as well now. Who knows. Brave is so wonky sometimes.

Just select the rarities you want to get or nothing if you want everything and wishlist all these unowned cards in one click!

Open promo packs only when you want

Now, links with promo pack redirect you to the series page, where you can decide whether you want to open the pack or not.

Overthought to counter or modify a trade? Not a problem

Now, there is a button to cancel all the changes and return to the original trade.

See which cards are used in trades

On the series page and in your collection, cards involved in trades now have a corresponding icon that shows the trades. The involved card is slightly highlighted in the trade preview. 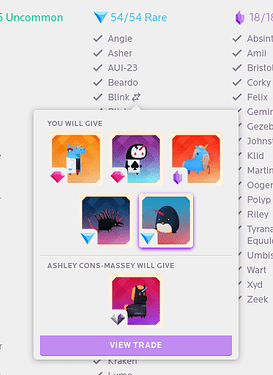 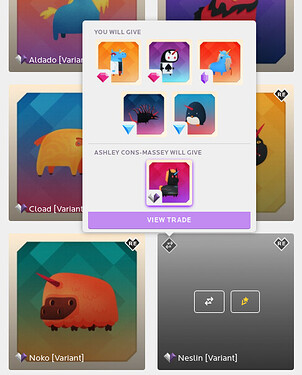 The detailed view of a card

Now cards have the order

Cards in trades will be sorted by rarity, so matching them is easier. 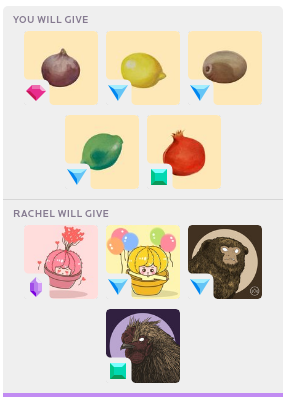 Now, you can unwishlist multiple cards as well - just set the favorite filter for it.

Now Trade Enhancements has its section on the account setting page. Currently, there is only one setting - to disable auto-opening of promo packs (by default, the setting is off).

If you want to know the exact number of owners/seekers - hover the text.

Small changes on the trade window

The filter set is moved down to the card search field that gets expanded when focused.

I just logged in to tell you how much I love your script. I was running on a different browser and I missed so many functionalities!

If you can, in the future, please consider adding a filter that only shows owners of duplicates that have less than 100% completion. The sorting buttons are toggled instead of combined, they either sort by the amount of duplicates or by the percentage of completion, and it makes it awful to find people who might be interested in completing a series.

It seems that this script is intermittently breaking. Not sure what the cause is as of yet.

Hi, update the userscript twice, or it will happen automatically for two days.
The project is moved to its own Github repo.