So I just started and honestly I’m a little confused. I get the gist of the website; collect art (cards) from collections by opening packs, and I get free packs every hour. I also understand how to trade, though there is a lack of cross referencing card-i-have and card-i-want, but there are a few things I still don’t quite understand.

How do free packs work? I opened a few because every collection I went to showed 3 packs next to the base pack, not knowing that there was a limit. So I opened three packs from a few different collections and now I’m just waiting for my free packs to refresh. Do these free packs stack if I don’t use them every hour? Where can I track them? Do they apply to all packs? How many do I get?

Also, like, does every card of the same value (ie, common, rare, chase) have the same value across every collection? How do I know what my card is “worth”?

Do you have a method for collecting sets? Do you make strategic trades? What are some of your strategies when trading? I’ll start- I frequently trade with Ocoto (the bot trader) when I have a bunch of dups I want to unload. As long as it’s an even trade, I’m able to get some of the common/filler cards that I’m looking for quickly. Can’t wait to find out what you guys do to finish your collections!

Thanks for replying! The main reason I’m making this thread was because I haven’t found any updated, from-the-beginning explanations of what exactly to do. I have found some remnants of people saying neonmob isn’t as popular anymore which makes trading harder, and something about an update that I personally dubbed “The Purge”.

Aside from that, though, what is a card count, and how do you find it? And if I’m only getting a certain amount of packs per day, should I be more concerned with getting more collections at the moment or be focusing on one? Also, are cards worth more trade value or credit value?

there was a bit of a upset about a year ago now when the sets changed from set print numbers to infinite prints*. If you look at older set pages, like The Gumpies for example, you will see details about each of the rarities and how many prints there are, as well as the odds of pulling that rarity per pack. For older sets, many users factor in these considerations when trading, as there is a set number and it is easier to assign a value to them.

For instance - if you know there are only 200 of a card, you won’t (or probably shouldn’t) trade it for a card that has 10,000 copies. it is much harder to get the card with 200 prints, therefore to many it makes it more valuable.
(if you look at a card you own, there will be a print number at the bottom right corner)

As far as collecting - that is really up to you. Collect what you want and feel free to use duplicates that you pull to trade for pieces you don’t. Usually offering something like a rare for a rare from the same set is really as close as you can get to a fair and equal trade. Aside from that, each user values their prints differently. Look at their page and see what they collect and the trades they typically accept (in their activity feed) and you’ll have a better idea of what to offer someone. Also some (like myself) put helpful tips in their bio to share their trading rules.

*Edit: to be fair, there were many other factors as well, but that is a summative way to share the past issue.

Thanks for the brief history lesson, that’s good to know! However, I’m still confused on how to tell how many prints there are. I checked out The Gumpies like you mentioned and couldn’t find that information

I’m also confused because the set that I decided to start with, Milky Yay! won’t let me use my free packs on it anymore, and I’m not sure why? Maybe I should start with a different set?

And how do I use points? Should I use them or trade instead?

As far as how many sets you should collect at a time, it’s really up to you. What I do is if I only have 6 free packs is to just focus on two or three sets at a time—by doing it this way, I’m able to get as many cards as I possibly can from a series at a time, and therefore increase my potential for trading. I mean, you’re welcome to try and collect as many different sets as possible at one time, but the downside will be that you won’t have too many cards available to trade from any one collection and thus will be unable to quickly grow your collection, especially with larger series. Basically less stuff to trade.

If you get a streak of opening packs and can get the extra +3 pack reward, you’re able to collect the most from more series, especially if you come back to the site later in the day. For example, I was opening the maximum number of packs from 6 different series daily at one time. Like having my cake and eating it too. -edit- Doing it this way also will make it potentially easier to trade across different series. From experience.

About credits, that’s also up to you. Some older sets like LET’S PARTY have run out of free packs and credit packs are the only way of getting those cards, barring expert trading. Sometimes using credits will give you perks when using them to open packs, like at least getting cards of a certain rarity or boosting your odds. These days, you can pretty much complete sets for free. (Well, you always could, but now it’s WAY easier) It will just take longer. I’ve used credits to complete old half-finished sets and to get prints from old sets I really liked.

Also that strategy thread silver linked is pretty handy. I found matthberg’s comment about calculating the print value of multiple prints in a trade to be suuper helpful. I’d put it in my trader bio but it’s too long.

You can install NeonMob Enhancer, which is a Google Chrome extension. 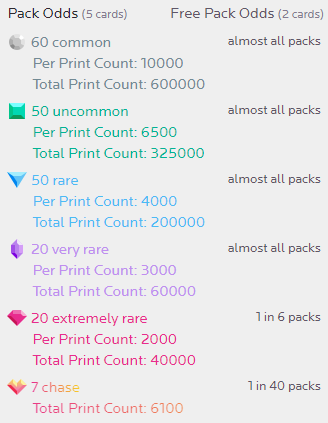 It also shows the percentage of prints that are claimed or how long it took until they were sold out.

The Gumpies (Free packs available, percentages happen to be the same)