I guess it’s a new update. 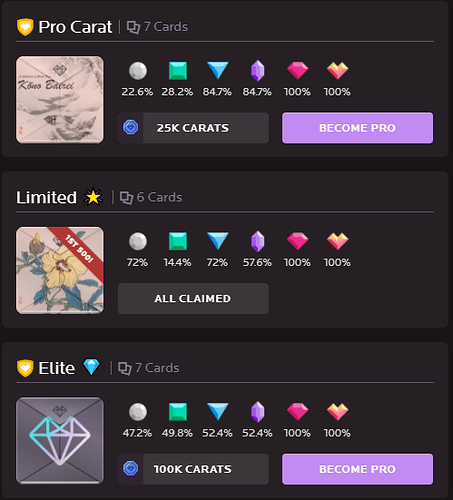 image500×551 76.2 KB
The packs in this image have a 100% for some rarities. This wouldn’t seem possible if it was some kind of drop rate unless the pack actually guarantees a card from each tier. Also, I can’t tell which of the three packs in the image are actually better, since the percentages are capped at 100%. (or is there a way to tell?) 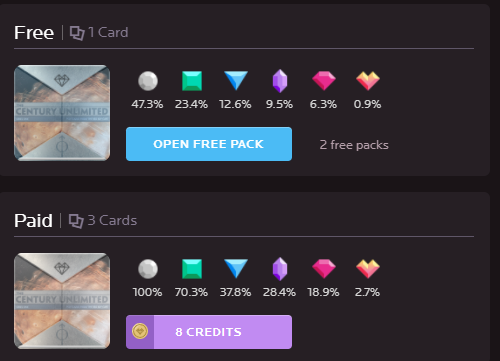 I therefore suggest that the people who manage this change the percentages to be more clear (you could maybe say the expected number of cards of a certain rarity, as a rational number.)

Yes, new update. Percentage of getting at least one card of that particular rarity. - Joe @ NeonMob

Well, either the way the site handles drop rates makes them change weirdly depending on how many cards you draw, or the percentages listed are wrong.
Quote:

The way the percentages seem to work is that a common with 50% drop chance in a 2 card pack would have a supposed percentage of 100%. It’s not guaranteed to drop!

The numbers are still wrong, or there’s a bug. I opened a pack that listed a 100% chance of an extra rare, but didn’t get one. (Specifically, a Best pack of Queens & Villains.)

The numbers do need a little tweaking and we are working on it; hoping to have an update within a week to 10 days. - Joe @ NeonMob

We did update the percentages this morning to be more clear and intuitive, hopefully that does help a bit to alleviate confusion. The update is global and all users see the same thing. - Joe @ NeonMob